I suppose we can talk about the cupcakes, now that I've had enough time to recover from the trauma that is a failed first attempt at an Italian Meringue Buttercream. It was god awful, pretty much like spreading way too much butter on top of a cupcake and eating it, which doesn't sound like such a bad idea, but I assure you it is. The really sad part is that the cupcakes themselves were delightful, and sparkly and pretty to boot thanks to my mom's tackle box of sanding sugar. The green one is a vanilla cupcake with vanilla frosting, the orange one is an orange blossom water cupcake with orange blossom water icing. The pink ones are both rosewater cupcakes with (you guessed it) rosewater icing, but the one in the front has blueberries (clearly), and the one in the back does not. 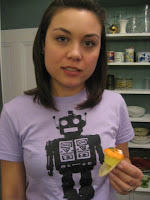 It was a little nerve-wracking adding these exotic water concoctions to the batters, but it actually turned out pretty cool (but google it I did not (this time, anyway)). The cupcake batter base was just a standard genoise batter, and I read somewhere recently and randomly that genoise is typically kind of dry, and that soaking them post-bake with either a flavored syrup or a liquer can really help them out. I didn't read this until after I had baked them, of course, so I didn't have this little nugget of info beforehand, but the cupcakes with the waters in them were significantly moister than the plain ones anyway. I was super excited about it, but I think I'll try it the other way next time, because maybe the flavor will be more intense. 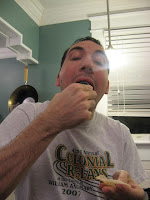 The blueberry-rosewater cupcakes were the definite standoutof the day, the flavor combo was a win, although only Joel and I know this because no one else got to try them. I got the idea from a blog I occasionally (obsessively) read, Bake and Destroy. Her recipe is a bit different, I'm still playing with ratios and just adding shit, and I am positive whatever delightful confection she put on top of hers was way better than mine. I also experimented with the plain cupcakes a bit, and just crammed leftover pieces of fruit (from my awesome fruit salad) into the cupcakes after I had poured the batter. The blackberry-crammed cupcakes were particularly good, so I'm going to have to play with that more later. 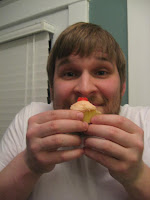 Big thanks to my lovely kitchen assistant Rachel, who very helpfully held the mixer while I googled italian meringue buttercream (DAMN YOU, google), decorated the orange blossom water cupcakes, sat in the kitchen and entertained me while drawing a picture of an ear, acted as food and flower photographer, and gave me some awesome nudie artwork. Thanks also to Joel and Michael for eating the cupcakes, and thanks to all three for eating my roasted potatoes and parsnips.

I also bought another cookbook (GAH!), but to make myself feel better, we're not going to call it a cookbook (or a comeback), just like the author doesn't. It's a cooking "project" book. I like projects. Not like THE projects, but just projects. It's by Karen Solomon of San Francisco fame (yeah, I have no idea what that means, either) and it's called Jam It, Pickle It, Cure It: And Other Cooking Projects. So basically it's awesome and I'm going to be making: jam, lemon curd, butter, queso blanco, ricotta salata, crackers, ketchup, marmalade, and graham crackers. Yeah. Get excited. 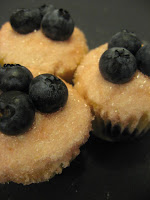 You will need:
2 Large Eggs plus one Yolk
4 oz Sugar (I did indeed invest in a small digital kitchen scale. Worth it.)
.5 Tsp Salt
.5 Tsp Vanilla Extract
1 Tbsp Lemon Juice
4 oz flour- cake flour is best, but AP is fine
1 Tsp Baking Powder
4 oz Butter, melted and then cooled
Some rosewater, to taste
One pint of fresh blueberries, rinsed (and dredged in flour if you're feeling fancy, it keeps them suspended in the batter better)

With which you will:
1. Preheat oven*. Combine eggs, sugar, vanilla, salt, and lemon juice. You can put these in a metal bowl over some simmering water for a bit until the sugar starts to melt and the eggs are just above body temperature, but if your ingredients are at room temp it should be fine. The little bit of heat at the beginning just makes it easier for you to get the eggs nice and fluffy.
2. Beat the crap out of this mixture until it's at least tripled, if not quadrupled in volume. Show no mercy.
3. Gently fold in the flour and the baking powder until you just can't see it any more.
4. Gently fold in the butter. But not too gently or you'll end up with a puddle of butter at the bottom of your bowl and that does not end up well. I read somewhere that if you mix a bit of the batter into the butter first and then fold THAT mixture into the rest of the batter, it helps. But I have not tried this yet.
5. Add rosewater to your desired intensity. Add blueberries. Pour into cupcake tin (lined, por favor) and bake until they spring back when you touch them.
6. Frost with something better than butter.

*350F is standard for regular sized cupcakes, but I've been baking mini lately, and I think 325F is better.

Did anyone notice a pattern in the ingredient list? It's pretty much a 1:1:1:1 ratio of sugar, flour, fat (butter), and eggs. One large egg is about two ounces, usually a little less (which is where that decadent extra yolk comes in. One time, I tried to bake a black forest cake for a birthday without any kind of mixer. That chocolate sucker called for a chicken's worth of eggs. I ended up with chocolaty, eggy hockey pucks. They were not good. I learned my lesson. Get dem eggs fluffy.
Posted by Tessa at 12:02 AM