Cheddar Garlic Biscuits and The Puddle of Butter.

And here I am, in this twenty-third year of my existence, wanting nothing more out of life than to be able to bake the cupcake to end all cupcakes. The cupcake that is so perfect, that other cupcakes lust after it and try hard to be it's friend, though a cupcake that good does not need friends. It needs pretty piped buttercream and adorable sprinkles. I don't just want to be able to do it once- I want to be able to do it over and over again, easily, and I'd like to be able to do it from memory, to know instinctively that this batter needs more flour- or that one didn't have eggs that were beaten to their potential.
Much time has been spent in my kitchen beating various parts of an egg into submission, for cakes, a hollandaise, or even just scrambled eggs- so beating eggs isn't really the issue. It's the constant need to look things up in recipe books, or googling tips and problem solving techniques mid-panic attack because my sauce looks like cottage cheese. I want to kick the cookbook habit and be FREE from dried egg whites on my keyboard!
My first tiny baby step into a dark, strange, and scary world of cooking without guidelines was to ask for a book for Christmas. A book. Of guidelines. I know, I sound like a crazy. BUT WAIT. It's the last book I'll ever need! I promise! It's called Ratio and it's written by a guy (Michael Ruhlman) with a lot more baking chops (ha) than I have, but the same goal! It contains 5 delightful sections of how to use a set of tweakable ratios to make most anything you'd want to- dough, batter, stocks, sausage, custard, sauce, etc. Genius. And I gotta say- so far, so good.
I used his biscuit ratio (3 parts flour, 2 parts liquid, 1 part fat) last night and made some pretty darn good cheddar garlic biscuits. I just diced up some cold ass butter, pinched it into some flour, mixed in some milk, and then added as much garlic and cheddar cheese as I wanted to. And then added more milk, because they were drop biscuits and Mr. Ruhlman said to add more milk for those. How much more, you ask? Until it looks like biscuit dough! SO awesome! 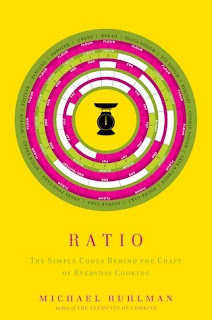 This does not change the fact that while I was adding cheese and garlic, I was still freaking out and DYING to google a cheddar garlic biscuit recipe to see if I was adding too much/little cheese/garlic and generally ruining everyone's biscuit-eating lives. But I resisted. And the darn things were great. So I'll trust the guy. I'm pretty sure I'm going to end up cutting the wheel image off the book's dust cover, frame it, and hang it in my kitchen for easy reference until I can spit out ratios like a pro.
Side note- I tried his sponge cake ratio. The batter was delicious, but due to an operator error involving folding (I am so bad at folding!), and discovering a puddle of melted butter at the bottom of the bowl (after portioning out a good dozen mini-cupcakes), I ended up with half a batch of dry mini-cupcakes, and half a batch of mini-cupcakes with chunks of re-solidified butter in them.I mean they still tasted good. And who says no to a cute, pathetic mini-cupcake?
Posted by Tessa at 9:31 PM