Prepare thyselves. This will be an epic posting. And not because I've been up to a lot in the kitchen in the two weeks or so since I last wrote, but because I've done a lot in the past two DAYS. It really has been a mini-marathon.
First thing's first. I know you all have pretty much been sitting on the edge of your respective sitting machines just WAITING for me to tell you how the Buttermilk Panna Cotta turned out using real buttermilk instead of the reconstituted powdered variety that I used with great success before. Well, exhale, my friends because I am about to tell you. It tasted remarkably similar. The real stuff turned out a custard slightly lighter in color and a bit lighter in flavor, perhaps, but all in all about the same. Now that that is out of the way, I will share the first of several recipes.

With which you will:
1. Sprinkle the gelatin over 1 cup of buttermilk and set aside to soften.
2. Bring cream and sugar to a boil, turn heat to low.
3. Stir in gelatin mixture, whisk for 3-4 minutes until dissolved. Remove from heat.
4. Stir in remaining cup of buttermilk.
5. Pour into serving dishes, cover with plastic wrap, refrigerate for at least 3 hours.

So easy, right? SO delicious! Has a nice tangy quality to it. It's great with sweetened strawberries on top, or by its lonesome.
That happened a week or so ago, but it didn't really make for an entire blog post, so I waited until the urge to get cooking hit me again, and it did a few days ago. And again, our story starts in Harris Teeter. After I ceremoniously spread some sample Irish Butter on a piece of sample Pecan Raisin Oval loaf (which was very tasty, and when I found the loaf, it was tiny and more than five bucks! CRAZY!), I stumbled upon a loaf of challah bread. I'd been toying with the idea of making french toast with something other than supermarket sandwich bread for a while, and here was a lovely loaf of challah! For an outrageous price. Eff that. So I moved on. But the next day I was back to pick up some lunch, and lo and behold! My challah loaf was now a day old and less than two bucks! Cha-ching! Sold! And day old bread is perfect for french toast! 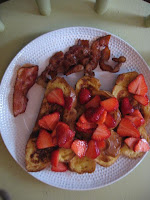 This recipe is from good old Alton Brown, with a minor tweak, and it was very tasty. Apparently he's lost a good bit of weight recently, and good for him. But it probably was not by eating this every day for breakfast. Yeah, I know you want in on that bacon action.

Perfect French Toast
You will need:
6 thick-ish slices of slightly stale bread (brioche and challah are great choices)
2/3 cup of milk or half and half
2 large eggs
1.5 tbsp honey, heated in microwave for 20 seconds
Pinch of salt
Splash of vanilla
Butter for cooking

With which you will:
1. Preheat oven to 375. Whisk milk, eggs, honey, salt, and vanilla together. Pour into a dish good for dipping bread into.
2. Dip bread into mixture, allowing each side to soak for 30 seconds. Let slices rest on a baking sheet for 1 or two minute before cooking.
3. Melt butter in pan over medium-low heat. Working in batches, cook slices for 3-4 minutes on each side until nicely browned.
4. Slide slices directly onto oven rack and bake for 5 minutes. Serve with topping of your desiring.

It's a really great recipe. I know it's a little more high maintenance than most french toast recipes, but the baking really makes the insides fluffy and decadent. I topped mine with sugared strawberries and it was perfect. Michael stuck with maple syrup.
That was yesterday's brunch. But that wasn't the end of the day. We still had to have dinner. It was a doozy of a dinner, too! We decided to go lighter since we had already had an insane amount of french toast, so we went the shrimp and rice route with a side of homemade quick pickles (another batch, made with my mandoline this time!). Remember those? From my second post? My, how time flies. 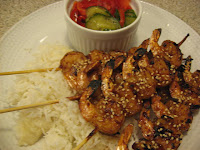 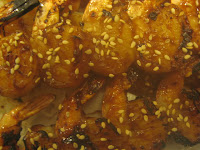 The shrimp was kind of insane. Three ingredients: Shrimp, hoisin sauce, sesame seeds. I'm not even going to type out a whole recipe for this. Just stick some peeled and deveined shrimp on some skewers, baste it in hoisin sauce while grilling, and then top with sesame seeds. Kind of stupid easy, and totally stupid delicious.
Which brings us to today. Another light-ish but super good dinner consisting of garlic bread (the rest of the challah) and Mushroom and Caraway Soup. If you like mushrooms and/or rye bread, you have got to try this soup. It came from Food Network magazine, but I tweaked it a tiny bit, too. I can't help it. 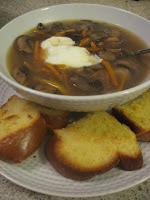 With which you will:
1. Melt butter over medium-low heat. Add caraway seeds and cook for about a minute, until it starts to smell awesome.
2. Add mushrooms and cook until they wilt a bit, season with salt and pepper.
3. Add carrots and broth, bring to a simmer. Cook for 10-12 minutes until carrots are tender.
4. Ladle it out and garnish with sour cream.

Food Network mag also adds a garnish of red onion, but I hate raw onion. So it did not even slightly happen. The soup was broth-sippingly delicious, and I will probably make this over and over again.
That's pretty much it for tonight, but I feel a Cookiesperiment blog coming on Thursday, and I will leave you fine people with this to think about: This chocolate chip cookie is inappropriate. Look at that slut showing off it's redonk chocolate filled interior to God and everyone. For shame, cookie. For shame. 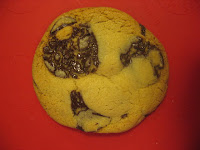 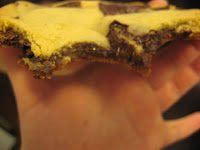 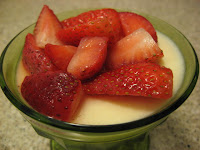 Methinks I got tired of typing the last time I wrote a blog. I was just uploading pictures of my bakingventures from today and came across pictures of Buttermilk Panna Cotta that I made almost a month ago and NEVER blogged about it. Well. Shame on me, because it was DELISH. I'm thinking maybe it's all for the best, though. I made that recipe with powdered buttermilk because there was only one container of real buttermilk left at the store and it looked like it had seen better days. So I will post a picture to tease you all, and when I make it with the real deal (which will probably just make it that much more delicious), I'll share the recipe.
Also, I made homemade chocolate pudding the other day, and I will say that it's better than the instant stuff in a box, but not outstanding enough that I wanted to take pictures of it and write more than a few sentences about it. However, if anyone wants to go to the trouble, I'd be more than happy to tell you how to do it. It's pretty simple. But not throw-some-milk-in-with-a-box-of-instant-pudding-mix simple. Moving on.
Michael and I love to shop at Harris Teeter. Everyone is very friendly there, they have good stuff, and MOST importantly- they put samples out. Usually, they put out three types of bread with three condiments, one of which is always some ridiculously good kind of European butter. MMMmmmm. I don't usually care a whole lot what the other two condiments are, being perfectly happy just to spread European butter on three different types of bread. However, the other day there was a very very yummy Lemon and Artichoke Pesto put out, and boy did they have me sold on that one. It wasn't easy to hunt down, as for some reason they don't put the product for sale near the damn sample, but I finally found it in a tub in the refrigerated section attached to a redonk six dollar price tag. Needless to say, the challenge was accepted. And mine is better. Here it is! 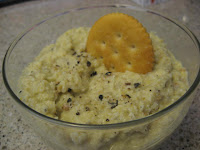 With which you will:
Put everything in a food processor and process until you're happy with the texture. Eat with crackers and stuff. You know the drill. 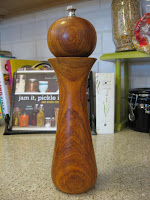 Quick shout-out to my new peppermill! It was a wonderful birthday present handmade by Michael's dad, and it's gorgeous, and it cracks a mean peppercorn! I would also like to use the rest of the space next to the picture of the peppermill to make an equally awesome shout-out to my new (FINALLY! YAY!) mandolin from my momma! I am super stoked to use it, and bought two cucumbers just to slice. So I need another pickle-type recipe. I also bought a jar of pistachios to make a beautiful batch of pistachio cupcakes from my new cupcake cookbook from Joyce! Man, birthdays are awesome. I'd say this paragraph took up the space nicely. I believe I will start a new one, now. 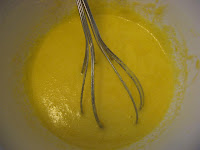 Another thing Michael and I like to do is watch The Best Thing I Ever Ate on the Food Network. WELL. Last night was the guilty pleasure episode, which, to be honest, we really should not have watched. I mean that had bad idea written all over it. Well, what's done is done, and now I have a chess pie working in the oven. Duff Goldman's guilty pleasure was Baltimore Bomb Pie (with a name like that, how could anyone say no?) from Dangerously Delicious Pies. It's basically a chess pie with Berger Cookies crumbled into it. Well, I don't have Berger cookies at my disposal. I really wish I did. So I'm working on my first attempt at a classic chess pie that hopefully sometime in the future I can crumble some other delicious cookie into. I'm thinking Girl Scout cookies? Yes. Yes I am. 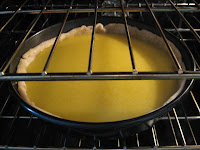 I'm guessing the goop in the picture of the bowl is "Chess"? I hope so, because that amuses me. To your left is a picture of the pie going into the oven. Below that is a picture of the pie just out of the oven. It is delightful.Custardy, and pretty sweet, which is surprising, because i cut way back on the sugar from the recipe because 2 cups sounded like a lot of sugar for one pie. It has a nice kind of crispy sugar layer on top. The pie has received very positive reviews from my mom, Michael, and Charlotte. I think it's a winner 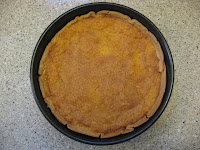 With which you will:
1. Arrange piecrust in a pieplate to your liking. Weight on foil with pie-weights, dried beans, or rice. Bake for five minutes at 425. Remove weights and foil and bake for another two minutes. Remove, let cool, reduce oven heat to 350.
2. Mix everything else up in a big bowl. Add crumbled cookies if you wanna try that before me (I'll hurt you). Pour into cooled piecrust.
3. Stick it in the oven for ten minutes. Take it out again. Cover the edges of the pie with foil or a pie shield (who has one of those??) and stick it back in the oven. Leave it there for another 40 minutes. Take it out. Let it cool.
4. Eat it!