Egg Salad, Quick Pickles, and Macerated Fruit, or Tessa's Ridiculous Day of Making Summer Foods in the Middle of January 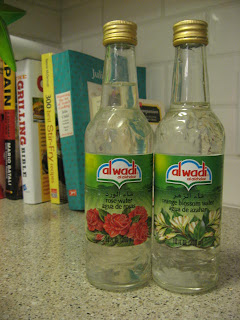 It's amazing the things I can accomplish on a day off when I don't want to search for a new job. After a mini-medical adventure with my mom this morning (she has a hernia! more surgery! could that be more annoying?), I arrived home to find TWO packages on my front porch. I mean getting mail is always fun, getting mail that isn't a bill or a solicitation is even better, but getting PACKAGES is almost as good as getting the awesome greeting cards my mom sends me. Package the first was a pair of blue pointy-toed flats that I'd been waiting for since, oh, December 26th. Package the second was my first, and very likely not the last, purchase from http://www.kingarthurflour.com, containing a bottle each of Rosewater and Orange Blossom Water. Oh the possibilities.
The first thing I did was try the shoes on. I mean they're bad ass, pointy blue shoes. I do have priorities. The second thing I did was have my mom smell our living room to see if she smelled cat pee (we don't have a cat). Luckily, with the aid of a small candle, the problem seems to have taken care of itself. But THEN the kitchen deconstruction began. First on the chopping block: the pile of fruit purchased with wonderful intentions of eating more fresh produce. Into a big bowl went: a chopped apple of a variety with which I was not familiar (but looked really pretty, and therefore must be delicious, right? Who's gonna make a delicious apple pun? Joel?), halved and pitted cherries, halved red grapes, a banana, a Cara Cara orange, and a blood orange. I gave the mix a squirt with a Meyer lemon (if you haven't smelled a Meyer lemon, do it, it is so cool), a few pinches of sugar, and a few dashes of the orange blossom water. SO GOOD. I learned later (after googling, I really can't kick the "must google after making something to make sure I did it right" habit) that oranges and rosewater go really well together, so maybe I should have squirted some of that in there instead, but at that point I couldn't get the damn bottle open, so next time. I have lots of leftover fruit. 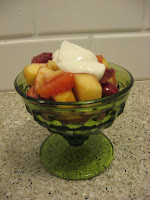 Spending a half an hour cutting up fruit wasn't enough, though. I had to do MORE. I had to make pickles. Not crazy, jar-sterilizing, farm pickles (which will likely happen some day), but quick pickles. I'll concede, the result is very much like a cucumber salad. But the veggies are crisper, and there's more of that je ne sais quoi-- pickle flavor. It was super simple (though would have been easier and less back breaking if I had a mandolin slicer mybirthdayisMarch2ndjustsaying)- 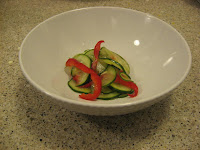 With which you will:
1. Slice the cuke and the pepper as thinly as you can. Coat them in the salt and let them sit in a colander on paper towels for 30 minutes.
2. Meanwhile, bring the remaining ingredients to a boil, then remove from heat and let cool.
3. Rinse veggies well, then get as dry as possible (methinks a salad spinner would have been awesome here).
4. Pour brine over veggies, and stick `em in the fridge for at least 3 hours before munching!

You may be thinking I was done after that. You would be thinking wrong. I needed to make egg salad. Michael has been asking for egg salad. Well, ask and you shall receive. So I go and get the stuff I need together....eggs, mustard, sweet relish......SHIT! My beloved jar of Duke's mayo expired a month ago! I guess that shows how frequently I eat sandwiches. Well, no problem. I'll go Julia freaking Child on this shit and MAKE mayonnaise (let us not forget there is a Food Lion less then a mile from my front door (that is how much I hate driving)).
..........
.....
...........
...................
Mayonnaise made from scratch is glorious.
It's also not all that difficult to make. I just used one egg yolk, because the egg salad didn't call for too much mayo. Just beat the yolk for a few minutes til it's thick and sticky, add a little vinegar and mustard and then slooooooowly beat in about 3/4 cup of oil. I used the plain ol canola stuff, didn't want to use the good olive oil since there was the potential for me to severely botch the whole thing. Seasoned with a little lemon juice and white pepper (my new favorite thing), the stuff is amazing. It's slighty more yellow in color, but just as glossy as the commercial stuff, and tastes way fresher. So if you ever wanna try it, go for it, cuz it's worth it. I was going to post a picture of the stuff, but really. Who wants to look at a bowl of mayo?
Did I mention that my latest Martha Stewart mag arrived via Postmommy? What a good day.Oh yeah, and I also baked some mini-cupcakes, but having not frosted nor tasted them, I'll talk about them later.
For now- Seacreast out.
Posted by Tessa at 9:09 PM