Yeah, I'm a terrible blogger and it's been over two weeks and blah blah blaaah. Get over it, I bake when I want. And today, I wanted to bake. And since I had an epic baking day, I'll go ahead and fill you in on all the other random things that have been created in my kitchen since January 18th. 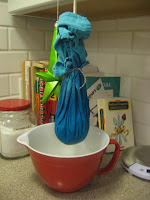 1. Yogurt cheese. Yep. I bought a big tub of plain yogurt and let it drain, rigged like this, overnight. And it's surprisingly yummy. And a whole lot better for me than cream cheese, that's for sure. Mostly I just wanted to include this picture because it's ridiculous. 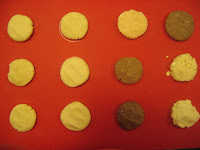 2. The twelve cookie experiment. One night, I really wanted to make a batch of chocolate cookies. For some reason, I made twelve differently flavored cookies instead and make Michael split every single one of them with me in a sitting so we could pick some favorites. That Ratio book I went on about in blog numero uno has a basic BASIC cookie recipe, so I made a batch of that and then took chunks out and flavored each one. I think there was a plain, a vanilla, a rosewater, a rosewater and sugar, a plain orange, an orange blossom water, cocoa, cocoa vanilla, cocoa orange, oat, and two others that apparently weren't good enough to remember. Maybe I mixed the orange blossom and the rose waters? Whatever. They were all tasty. Michael hated the ones with the waters, saying they tasted like perfume. I liked them, and argued that they were "boutique-y," not perfume-y. I also really liked the cocoa orange one, but Michael doesn't like that flavor combo. He liked the plain cocoa. Sigh. Anyway, the point of the story is that I'm a crazy person and didn't make a SINGLE chocolate chip cookie, but instead made twelve other cookies out of whatever crap I had lying around.
3. Graham crackers. From scratch. That's right. This idea came from that "cooking project" book I've blogged about. That's also where the yogurt cheese came from. These came out super yummy, and now I can say that I have made a graham cracker from scratch. Before that night, I didn't even know what the hell was in one of those things. Well, let me tell you. Molasses and honey. They were so good. Not pretty though, and I'm guessing that's why I didn't take a picture. I'm also having problems with this "cooking project" book, as this was the first of now two of her recipes I've made that didn't call for nearly enough flour. It is not possible to roll out a sticky mess and cut it into shapes and bake them. MORE FLOUR, LADY! 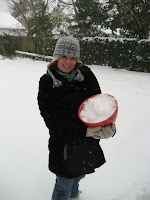 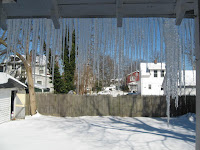 Somewhere around this point a whole bunch of fluffy white cold stuff fell on the ground. I have no idea where the hell it came from, I just woke up on Saturday morning and there it was. Michael and I being, the adventurers we are, we went outside to play. I hit him with a few snowballs, he debated on whether or not he could drive to work, I fell on my ass, and we felt bad for the mailman. Then it was time for snow cream! We decided the snow in our backyard was probably the safest since we have zero shrubs and even zero-er trees back there, and we found that we had some pretty badass icicles on our back porch, as did most people with porches did, I'm sure. Moving on. I filled my big red bowl with a lot of snow and then we trudged back inside for the day, because by that time we were freaking cold and it wasn't fun anymore. So I dumped a can of sweetened condensed milk (which was intended for a tres leches cake, which STILL has yet to be made) and some vanilla into the snow, mixed it all up, and hunkered down on the couch with Michael and a couple of spoons and it was delish. The sweetened condensed milk was Paula Deen's suggestion, and a damn good one.
Which brings us to today, my day off and my oven's day on. 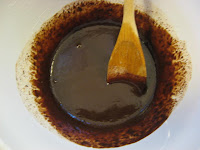 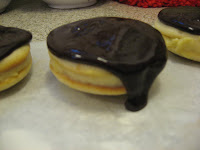 4. Boston Cream Pie Cookies. For no reason whatsoever, I googled boston cream pie today. And then for even less of a reason, I googled black and white cookies. And then for every reason EVER, decided to mash the two together and make these damn cookies. I have no idea whether or not I like them yet. After tasting batter and test cookies and pastry cream and ganache all freaking day, I just do not want to eat one. So maybe after I have some real food I can give some real feedback. One thing I can say? They look awesome. It was minorly terrifying making pastry cream, and I'm pretty sure I did it wrong, but it tasted okay so we're just going to run with it. At one point it was not looking healthy, and I wish I had a picture of it, but I was too busy freaking out at the time. Michael just tried one and he says, "It was a wicked pissah!" Which is apparently a good thing? I think the most important thing we can take away from this whole Boston-cream-pie-cookie experience is that the picture of the bowl of ganache is awesome, and pretty much just makes me want to eat ganache. The cookie/cake things didn't turn out quite perfectly, like those wonderful soft spongy black and white cookies, but they sure did the trick. Anyway it was fun and I'd do it again. 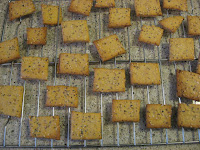 5. Onion, Poppy-seed, and Sesame Crackers. This was recipe numero cuatro from the "cooking project" book, and the second recipe that doesn't call for nearly enough flour. Regardless, I wanted to try to make crackers, cuz I've never done it before, and this flavor combination sounded good. I should start by telling everyone that I'm not Onion's number one fan. Probably not even close, I've never tried to eat a Vidalia onion like an apple before, and the thought of it pretty much gags me. I decided since cooked onions are slightly less heinous, that I'd probably actually like them in these crackers. HOWEVER. Being such an onion newbie, the chopping process had me almost sobbing, EVEN with the aid of my new shiny food processor. So I had to leave the kitchen for a good ten minutes to regain composure. Which was fine, since it had been about five minutes since I had checked Facebook last. So then I browned the onions, made the cracker dough, refrigerated it, took it out, realized that no amount of refrigeration was going to compensate for the lack of flour action going on, added a lot more flour, rolled 'em out, cut 'em, baked 'em, and here we are. They're pretty tasty, and darn cute to boot. I think I'll make cheese crackers next time.
Suggestions?
Posted by Tessa at 11:18 PM